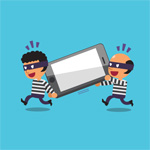 I think you would agree that the saying ‘there’s one in every crowd’ takes on a whole new meaning when it comes to company theft.  It’s an ugly subject for sure and now that I’m in the know around the dark side of mobile expense management, I feel it’s my duty to share it with you so that you can avoid it and stop it if it’s happening to your company.

It started out innocent enough.  A well-known, nationwide company was introduced to MobilSense through an associate who after hearing about his friend’s mobile challenges thought we could help.  Since the friend was the manager, he assigned the discovery phase to his mobile specialist who became our point of contact.  Once introduced, we went through the normal routine of presenting the features and functionality of our platform.  The point of contact seemed to be impressed and after a meeting with the executive, we were off and running, or so we thought.  The point of contact agreed to give us his carrier logins so we could upload their data.  Once the data was uploaded, we identified a large monthly savings which was so impressive he was excited to share it with our friend and sponsor.  It was a great start! Or, so we thought.

The first indication something was amiss was when we couldn’t get the new point of contact back on the phone to talk about next steps.  We emailed, we called, we emailed and we called with almost no response.  After some internal dialog we decided it would be remiss if we didn’t circle back out to our initial contact; which we did.  He was surprised to hear that things had not moved forward, apologized and scheduled an in-person meeting with his team.  The meeting was as successful as we thought it would be once they saw the amount of money they could save by using MobilSentry.  By the end of the week, we had a new client.  That’s when things got interesting.

One of the key recommendations was to terminate a number of older technology phones.  But, for some reason, we couldn’t get our point of contact to give us the information we needed to terminate the devices.  When we finally went ahead without him and processed a large number of terminations, we noticed there was a percentage of phones with new early termination fees (ETFs).  Big red flag!  How could that be?  The devices had been zero use devices for many months; many with no-use for longer than a year and were still zero use!  That’s when the shenanigans came to light.  The ETFs were a result of new smartphones being ordered against the inventory of zero use devices.  The zero use devices continued to be zero use, but somewhere out-there was an inventory of company purchased phones being used by anonymous people on their own mobile accounts so it didn’t show up on our customer’s bill!

We now all have to wonder; how many smartphones and/or hot spots are being purchased by companies with corporate liable cell phones for non-employees?  Don’t be this company.  Be the company who manages effectively by working with a mobile expense management company, like MobilSense.