In last week’s tip we introduced the concept of using data devices such as tablets with their lower 2 GB plans to bring your overall pool cost down.  We build on that topic this week with the theme that there is no reason to pay your carrier for unused and unneeded data, particularly when the penalty of overshooting is not particularly painful.  The cost/GB of data plans can range from $8.00/GB (10 GB plan) to $15.00/GB (2 GB plan).  In contrast to voice overage rates that can be 5 times the cost/minute of your voice plan, the cost of exceeding your planned data levels is no more painful than the cost of buying the original 2 GB plan at $15.00/GB.  Because of the low differential between planned data and unplanned overage rates, you have a situation with data pooling where it doesn’t benefit you to maintain a buffer, it actually costs you more.

While the most effective method of managing a data pool is to make monthly adjustments based on historical trends and recent growth rates, a low maintenance flat pool approach can be quite successful given the modest overage rates for data.  Most data usage average values fall well below the common 5 GB plan level for data cards.  When incorporating a growing volume of smartphones as well as tablets that offer 2 GB plan options, you may finally be at a point where the amount of data purchased in the pool can actually come close or even fall under your average usage rate.  You will need to have a data pool made up predominantly of smartphones and/or tablets with only a small minority of data cards to generate a pool environment where you can actually carry fewer GBs in the pool than you might use in peak months. 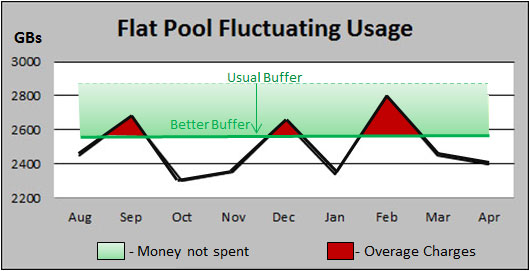 The scenario demonstrated above represents around 1000 data capable devices with over 75% of these devices being smartphones and tablets and only 25% traditional data cards. Common wisdom in setting pool buffers is to find a peak usage month and then to build in a small buffer on top of that to avoid incurring overage charges.  Many companies don’t have the means to make continual adjustments to their pools so they will utilize a methodology of investing in a flat pool amount that provides some protection against overage in the peak months.  The downside of data pooling is that it can show higher levels of variability than a typical voice pool on a month to month basis.  The upside to the data pooling rate structure is that you no longer need to approach the exercise of setting your pool levels based on an overage avoidance strategy.  In fact, if you carry too much safety buffer, you are going to be paying the carrier even more in down usage months and you never get money back for unused data.

This example contrasts a traditional buffer strategy set at 2900 GB/month by applying a 4% safety buffer over the highest usage peak versus taking that same 4% buffer over the average usage for this period.  By definition with fluctuating usage, the average pool level line is going to incur periodic overage rates for peak months but since the cost of those overage months is slight, you will still come out ahead because you make a significant reduction in the amount of data paid for but unused.  The scenario above for 1000 data devices generates a 4% annual savings or $13,400 despite 3 months of overage.