Why Weekend Wireless Data Usage is a Problem for Coops

Much like a magician’s sleight of hand, ‘free and unlimited’ voice minutes and text messages have caused many companies to take their eye off the coin long enough to miss a steady growth in wireless data costs. Combine this with a misplaced confidence companies have in their carriers’ desire to keep costs down, and a perfect storm has been created for over spending on wireless.

Carriers are motivated to encourage off-peak usage because it presents a great opportunity to leverage a sunk cost infrastructure investment to meet peak usage demands. When voice was the primary cost measure, we became comfortable with the notion off-peak voice usage was free. While nothing is ever truly free, it appeared to be so because there was no punitive cost impact for excessive off-peak usage. We shouldn’t fault carriers for attempting to maximize their infrastructure investments, but carriers are now benefiting from the carry-over effect of users becoming accustomed to getting a free ride on off peak usage. However, when it comes to data usage, it is an entirely different story.

Now that all consumption is measured as data, you may have noticed that there are no off-peak data usage breaks. The result is that companies find themselves woefully inept at monitoring off-peak usage leaving them blind to rapid off-peak data growth. Further compounding the issue, data usage is getting a huge assist from an army of application developers who provide an unending supply of ‘data usage traps’ for consumers. Many of these apps are oriented to non-business hour entertainment and distraction. Simply put, measured data has become a lucrative revenue source for the carriers. 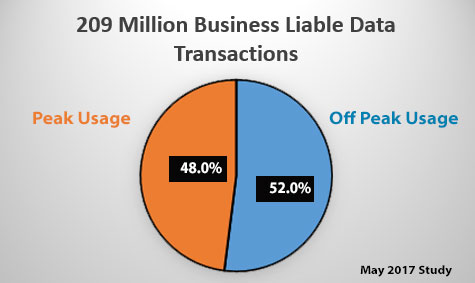 In a recently concluded study, MobilSense analyzed over 2.5 petabytes of data from business-liable smartphones, tablets and data cards over a period of 15 months representing over 200 million transactions. Would it surprise you to learn that 52% of all data traffic in this study occurs during night and weekend hours? This is the same period of time when voice used to be free. That means that only 48% of average employee data usage occurs during business hours and even then, some of that time may not be concentrated on legitimate business usage. For some companies, it is not uncommon for off-peak data usage to actually exceed peak data usage. In other words, the type of data-intensive application usage such as streaming video is an activity more associated with an employee’s downtime than productive work-related activities.

Too often companies accept the steady increase of wireless invoices as just a ‘cost of doing business’. With increasing field force automation, even if the wireless cost is rapidly rising it is frequently justified by other offsetting efficiency’s. The truth is data costs shouldn’t grow if they are effectively monitored and managed. Data charges are now the predominant component of any wireless invoice which suggests that the average company may be spending 52% more on mobility than is warranted.

The continuously increasing trend to use more data is not going to subside. Companies are now challenged to manage this fundamental cost component of their corporate provided mobile devices. The only way to effectively solve a problem is to identify the behaviors causing the problem, develop clearer internal policies and deploy technology to measure the compliance with these new corporate standards. Click below for a free whitepaper containing suggestions on how to deal with this growing problem.

Don’t let runaway off peak usage lurk undetected beneath the rising tide of wireless data expense growth. You may be interested to learn just how big of an off-peak data usage problem you have. We have a unique capability that no one else has to perform a rapid and comprehensive assessment at no cost on your data usage patterns. Click below for a free, no-obligation off-peak data analysis.