Is It Time for Data Pooling?

There are two driving factors that have led the charge to more practical answers for data pooling. First, carriers are motivated to replace the older generation of unlimited data plans with new bounded data plan options and second, competitive pressure from the consumer/family arena is driving new data sharing choices while undermining traditional corporate data plans. The carriers have responded with the first wave of corporate data sharing plans. Though the savings are not dramatic, for most corporate environments the current offerings are a step in the right direction.

With the exception of Sprint, who chooses to differentiate itself on the basis of unlimited data plans, the carriers are aggressively moving to create stepwise capacity-limited tiers and in other cases throttle throughput speeds once plan limits are reached. Previously, data pooling represented a sizeable risk due to high overage rates and the ready access to unlimited data plans. Now that overage rates are less painful, it’s a rare occasion when companies don’t benefit from data pool savings. 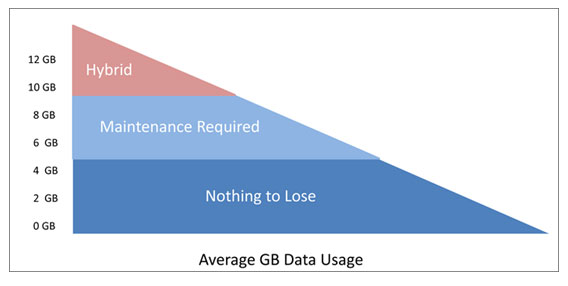 With a limited number of data tier options for data cards (5GB and 10GB) it can be challenging to accomplish granular buffer tuning. The graph above differentiates three slightly different approaches to pooling based on the average GB usage per data card. Because the carriers sell the shared version of data plans at the same price as the non-shared ones, there are some ‘no-brainer’ instances for data pooling. If you are averaging less than 4.5 GBs across all your corporate data cards and you have a reasonably large population (> 100) then it makes no sense not to pool. Putting everyone on a shared 5GB plan will be the same cost as leaving everyone on the 5GB individual plan but with added protection against overage charges. Savings will come from users that would need 10GB plans to avoid overage or those that would otherwise incur overage charges on 5GB or 10GB individual plans.

For companies in the band that average between 4.5GBs and 9.5GBs per data device, data pooling is also advised but may require some monthly monitoring and maintenance to insure ongoing savings. Once your data usage grows beyond the bounds of 5GB plans, your savings will then fluctuate based on your capacity to maintain cost effective buffers through a mix of 5GB and 10GB plans. To learn more about setting correct data pool buffers check out our tip ‘Don’t Pay for Data You Don’t Need’.

In our experience, it is rare a pool of data cards would average > 9.5GBs but in this instance it is important to recognize carriers charge less for overage on individual plans ($10/GB) than they do for pooled plans ($15/GB). Meaning, if you frequently incur overage charges even when every device is maxed out on a 10GB plan, then you may want to consider a mix of plans where the highest users are removed from the pool to benefit from lower overage charges of individual plans.